AS THE nation prepares to mark Remembrance Day (Nov 11), Londoner Selena Carty is paying special homage to the wartime efforts of black soldiers and their families through her Black Poppy Rose campaign.

The initiative began in 2010, and celebrated its fifth anniversary in September. Speaking to The Voice, Carty explained the inspiration behind her initiative. “My parents came from the British Empire and I found that when you’re in England, they document everything through museums, documentaries and monuments,” she said. “But I felt that it wasn’t right that our representation [in the war effort] is not out there, as somebody who is a British citizen.” 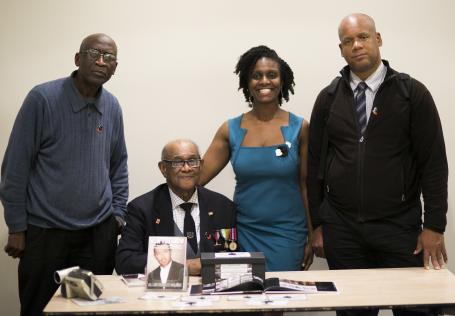 Revealing that two of her ancestors had fought in the Crimean War and the Second World War, the vision to launch the initiative came long before the 33-year-old became aware of her direct ties.

“I decided that if there wasn’t something there, I was going to make something so I can remember,” she explained. “If I felt that way then surely there was someone else out there who wanted to remember.”

With the Black Poppy Rose as an alternative to the traditional red poppy, Carty asserted that the intention is not to detract from the legacy of the British Legion.

Speaking in defence of ITV newsreader Charlene White, whose decision to not wear a poppy on-screen continues to be an annual matter of contention, Carty said: “With the red poppy, it’s almost like an unwritten law that when the time comes, those people who are in [prominent] positions must wear them.

“It comes back down to personal choice. People choose to remember in their own ways and that’s why we now have a Black Poppy Rose, because it’s a choice to remember the African contribution.”
Available at independent retailers in London and Birmingham, the Black Poppy Rose is described by its creator as a symbol of pride, honour and glory.

The funds generated go directly to The West Indian Association of Service Personnel (WASP). With these funds, the initiative is currently curating a collection of memorabilia documenting black involvement in the war efforts across history.

Running the campaign alongside her history studies, Carty is aware of the criticisms that have been generated by her efforts.

She said: “There are a few people who will comment and say things like ‘we shouldn’t have been in a white man’s war’ but I think when we say that we have no conception about the historical genealogy that we all face. There are those of us who wouldn’t be here today if it weren’t for the efforts of someone and that runs right through history. That is worth remembering, above and beyond everything else.”

Carty added: “I’d love to see the Black Poppy Rose create global remembrance for the contributions that we’ve made to civilisation and for our children to be inspired about themselves and what it means to be black or African and to feel empowered by being who they are and were born to be.”

About the Author: Black Poppy Rose